Today, I received the Ubiquity EdgeRouter Lite as a replacement to my current pfSense router. I have been using pfSense on a custom computer for the past few years and got the EdgeRouter Lite as an attempt to reduce power consumption (pfSense system uses 56W via Kill-a-Watt). I will follow up this review with a more detailed comparison between the two setups after I have used the EdgeRouter Lite for a month or so. Anyhow without further back-story, the unboxing:

The EdgeRouter Lite comes in a standard retail box with product images and basic specifications around the box. The front of the box shows an image of the router as an isometric view. The device I received is the newer version which has the metal casing instead of the original version's plastic cover. 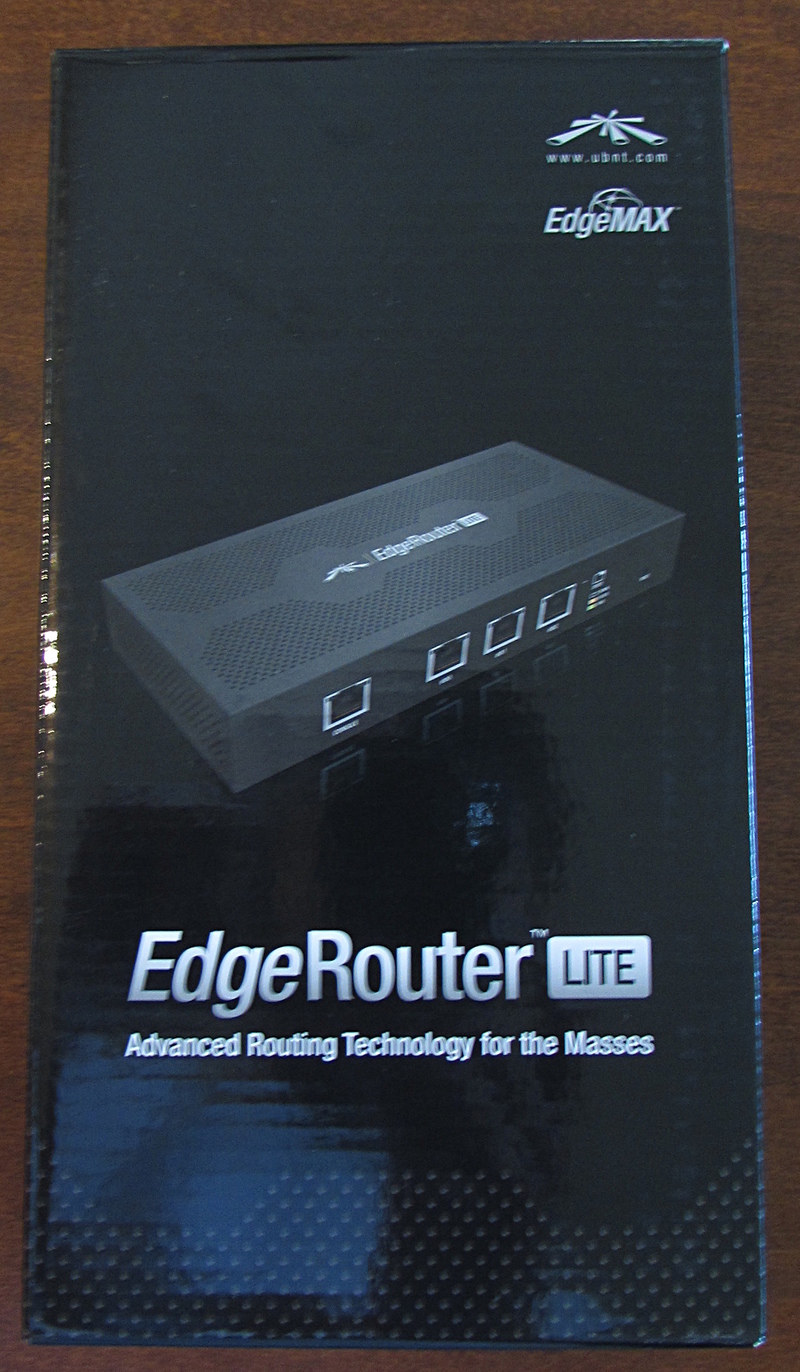 The first side of the box shows ta couple screenshots of the web interface which seems fairly user friendly and lists the default IP and user information.

The back of the box shows the top and front views of the router showing the three Ethernet ports, the console port and the reset switch. 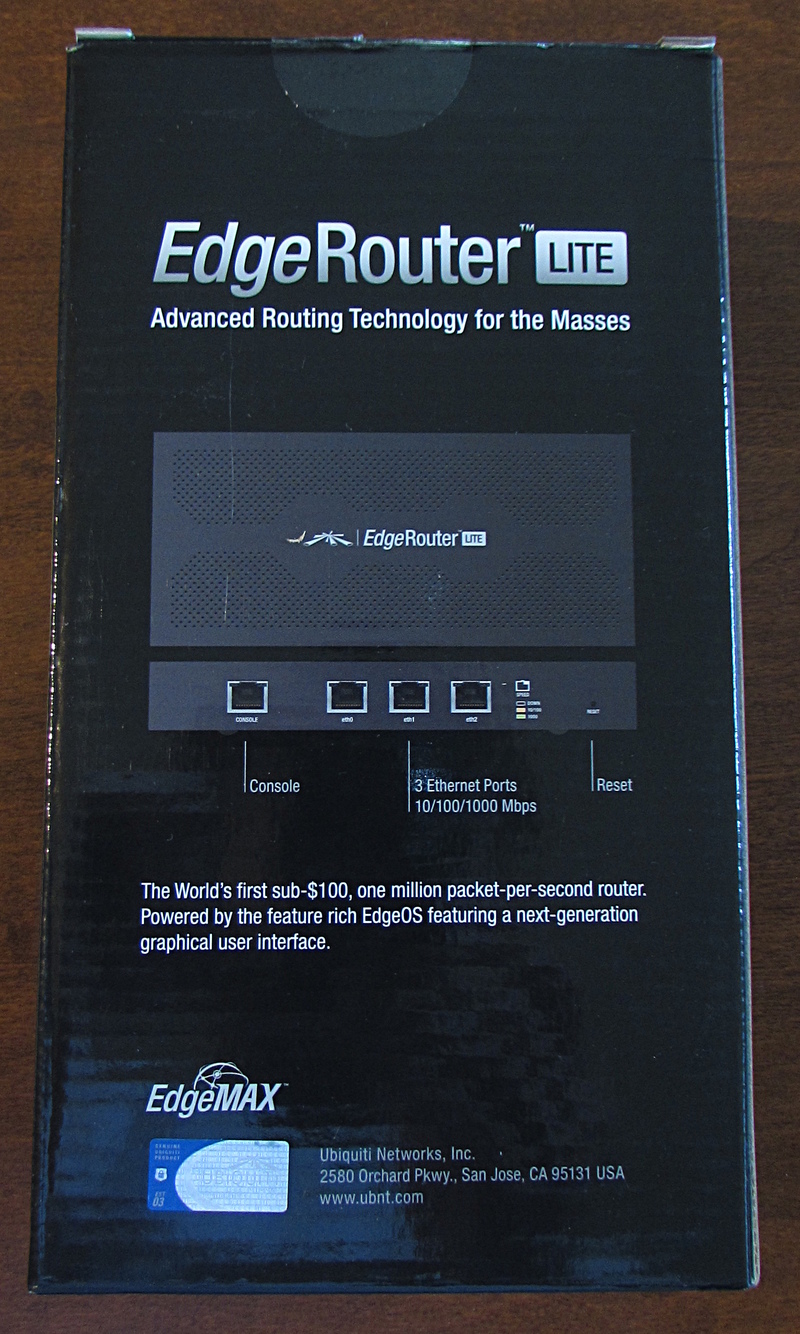 The second side of the box shows some of the product specifications and lists the box contents.

Upon opening the top of the box a formed cardboard tray pulls out to reveal the quick start guide on top of the router. Below the router is the power supply and mounting screws. 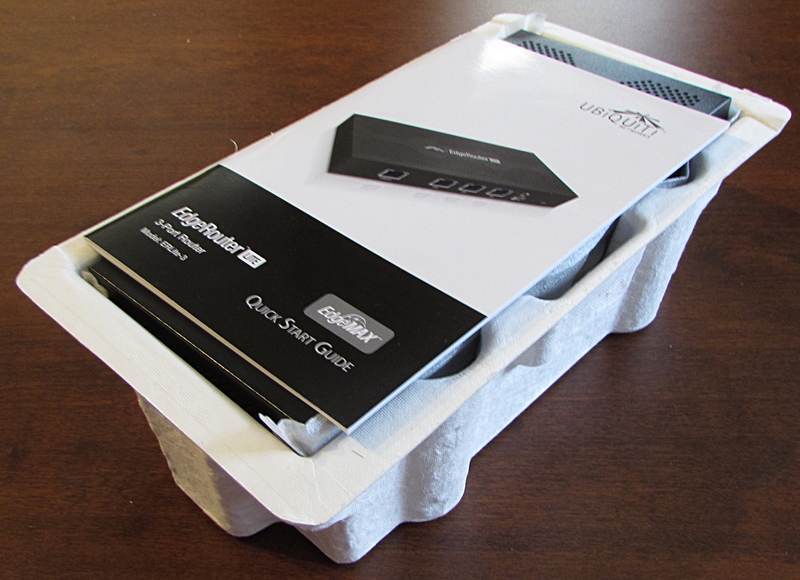 Overall, the packaging seems decent and is what I would expect for a product of this type.

Moving on, removing the contents from the packaging gives a better idea about the device. The contents are shown below and consist of the quick start guide, the router, the power supply (3.5 ft cord), 2ft power supply cable, and mounting hardware.

The power supply is a custom branded 12 Volt 1 Amp supply (12W out max) capable of accepting 100-240 Volt AC. This alone shows that the router should be much more power efficient than my pfSense setup. 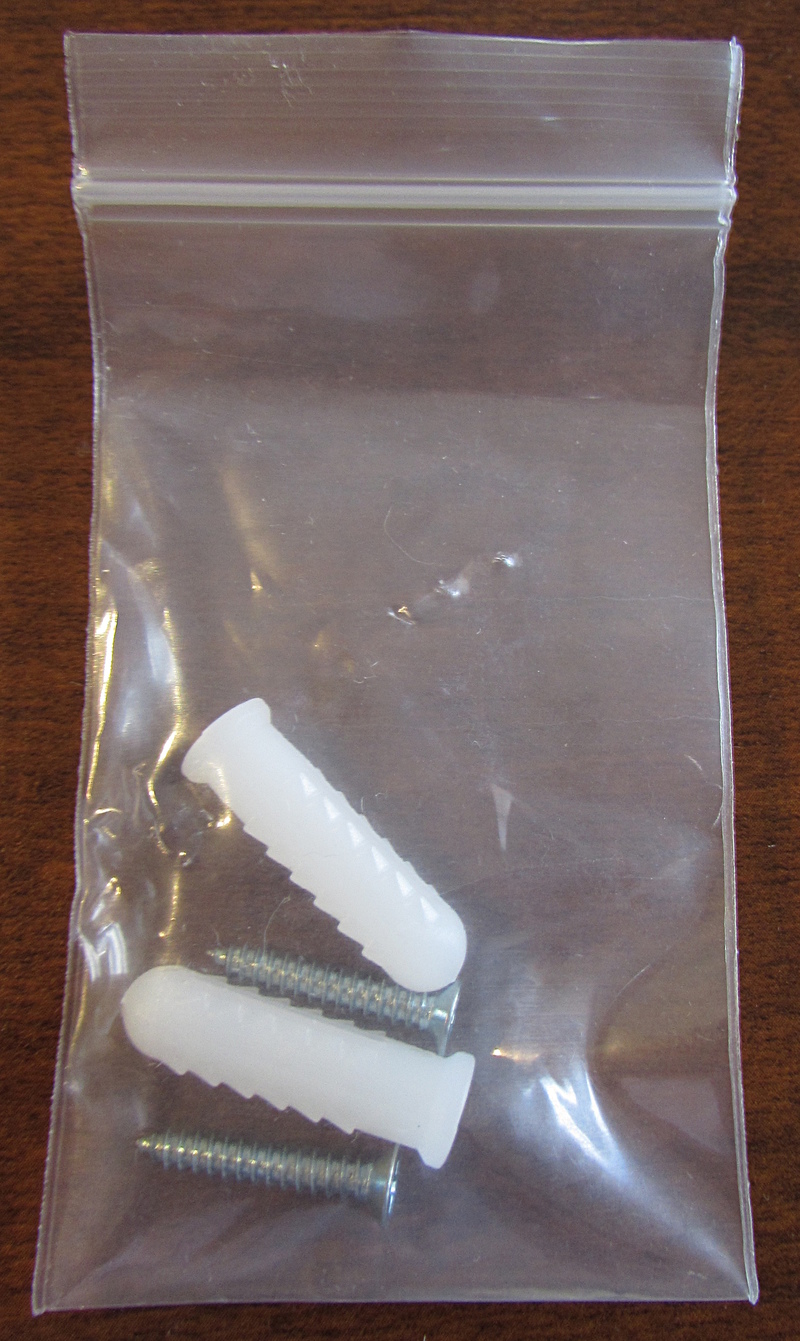 The router is enclosed in a two piece metal enclosure which is held together by three small screws in the back and a lip in the front. The casing feels sturdy enough and has perforations on the top and three sides to assist in heat dissipation. The top of the router has the Ubiquiti logo and the device name in the center.

The front of the router contains the three Ethernet ports each 1000Mbps (1Gbps) labeled eth0-2. Next to them is the legend for the indicator lights. The console port is to the left and is labeled CONSOLE. The console port is for use with the Cisco style cable and a COM port. On the far right is the reset switch for if/when things go wrong.

Moving to the back of the router has the DC power input jack and the grounding clamp.

The bottom of the router has four small rubber feet for setting the device on a flat surface. Given the low weight of the device though it may want to slide once cables are connected though. Across the center are the two mounting holes which are setup to allow vertical or horizontal mounting of the device.

The quick start guide covers the basic details of the device and what the lights mean. The guide also suggest using CAT 5 or better cable (I recommend CAT 5e or 6). Instructions for wall mounting are provided with the screw spacing and clearance. Overall the guide is well written and illustrated.

Powering up the unit results in the green light on the CONSOLE port turning on, this light is used as a power indicator as stated in the quick start guide. For initial setup a computer needs to be connected to the eth0 port and configured with a static IP in the 192.168.1.x range. Then by opening a browser and pointing it to 192.168.1.1 the web interface of the router is reached. I received the yellow SSL security warning page in chrome, however I choose to ignore the warning. This then results in a login screen with a license agreement. At this screen the default username and password of ubnt is used to continue. 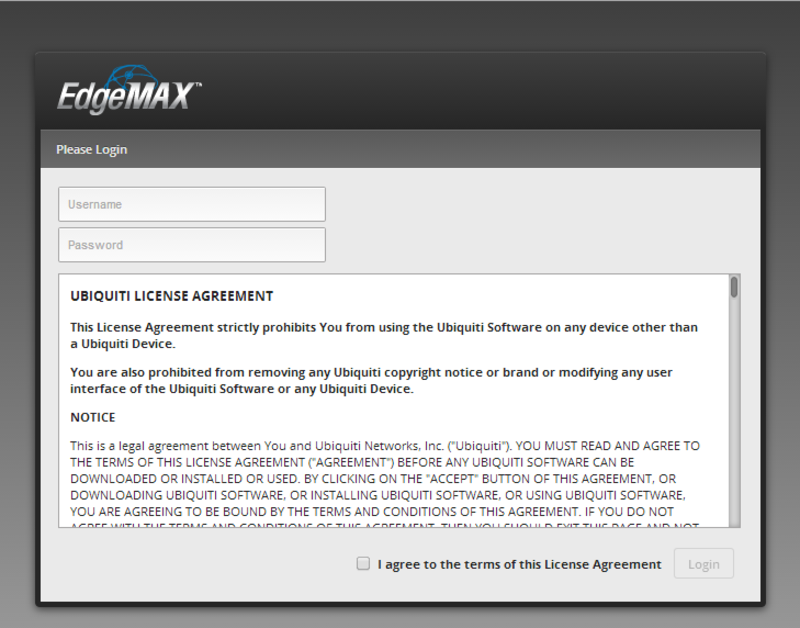 Upon logging in the dashboard is reached. 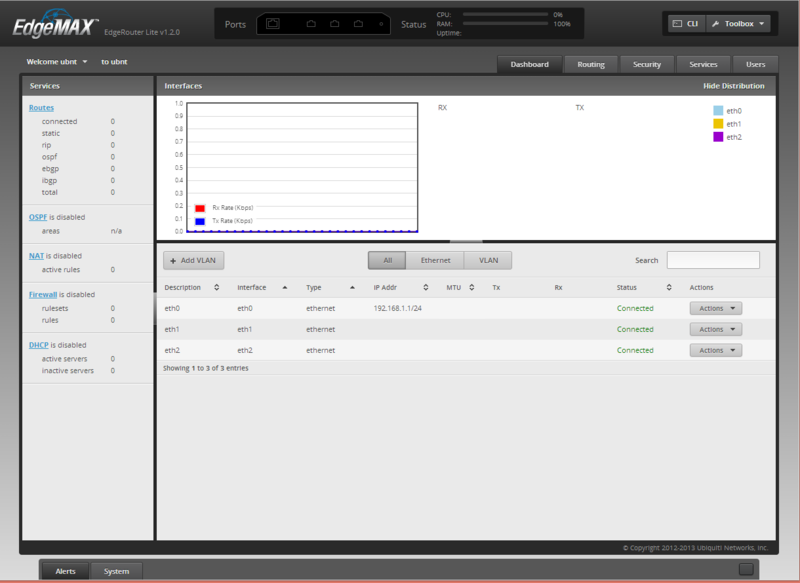 Since a new system image is available I download it off of the Ubiquiti site at http://ubnt.com/download/ The current version is v1.50, installed was v1.20. To update the firmware, the system tab at the bottom of the web UI is clicked which brings up a panel, scrolling down to the bottom of the panel reveals the Upgrade System Image section. I admit this threw me off for a few seconds as I was expecting the upgrade to be in a tab at the top right or in the toolbox, but instead is at the bottom left. This position however is fine as system settings will not be adjusted as frequently. 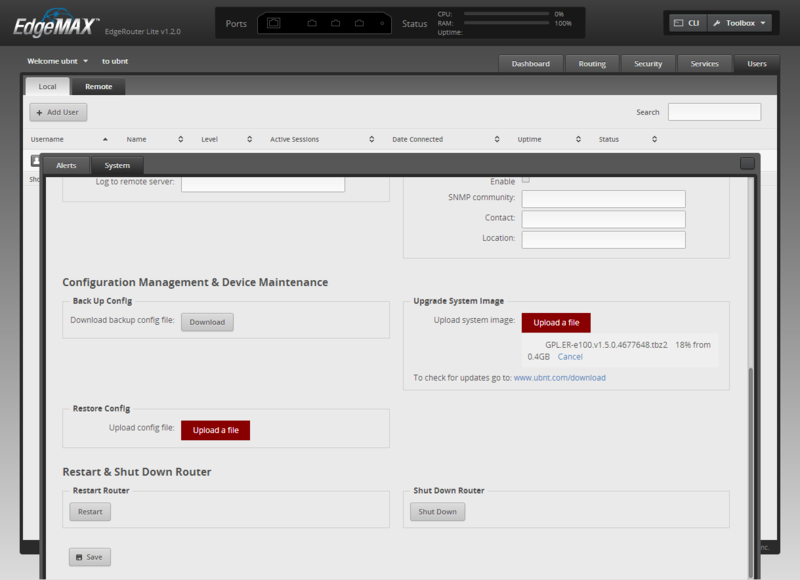 After uploading the new firmware the router prompts to reboot. After waiting for the router to reboot and logging back in the, the dashboard is reached. A few minor things have changed, the indicator at the top of the page now works and shows the port, CPU, and RAM usage. Additionally now there are Firewall/NAT, VPN, and Wizard tabs. 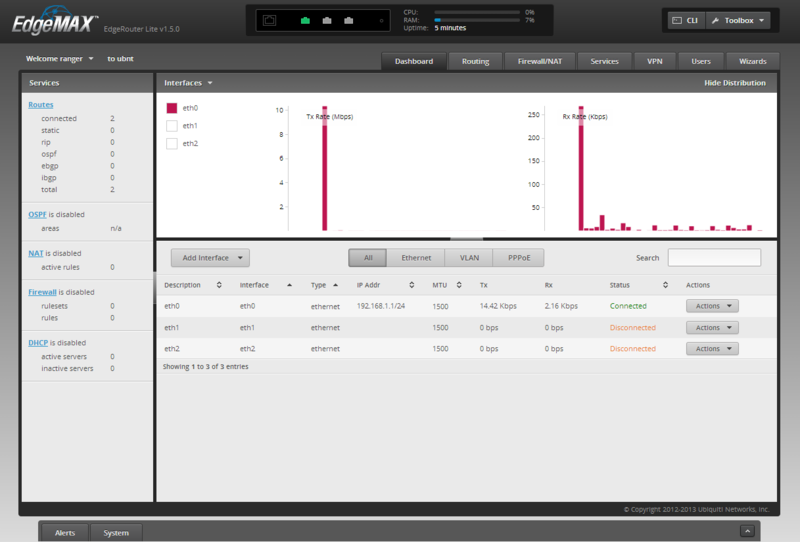 Since I am using the router as a simple home networking router with one WAN and one LAN port I will use the setup wizard to get started. I select the WAN+2LAN wizard. The wizard is fairly straightforward, since I am using a DHCP connection I leave everything with the defaults and select Apply. Since the router is only connected to my computer the internet connectivity test fails. I decide to finish setting up the router before swapping it out with my existing one. 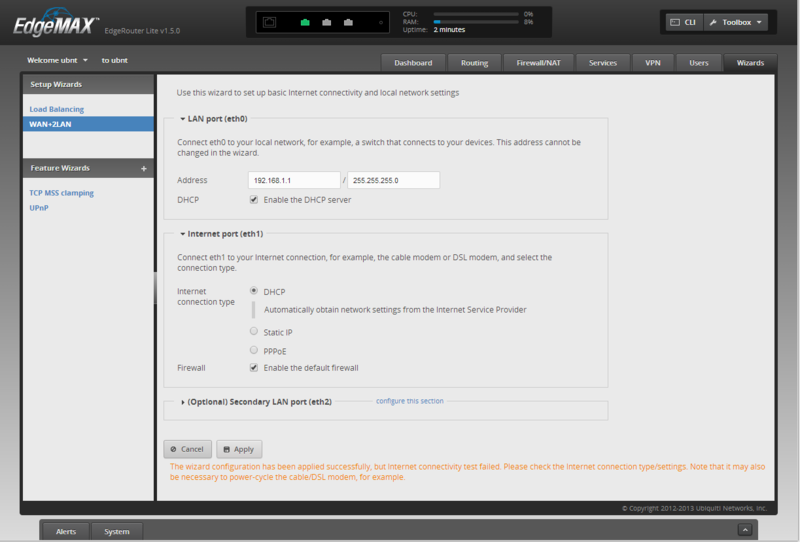 As recommended by Ubiquiti, I add a new user to the router and remove the old ubnt user. This is accomplished via the Users tab.

At this point I configure a few of the options specific to my setup such as the system hostname and domain. Additionally I use the UPnP wizard to setup UPnP on my first local network eth0 to WAN eth1. Now I replace my existing pfSense router with the EdgeRouter Lite.

I am not going to go into as much detail in this section as there are many options, which can be set. After replacing my old router and confirming internet connectivity, I worked to tweak the last few settings and test out the performance of the router. After running some speed tests the router was still able to max my bandwidth (50Mbps/10Mpbs Comcast) which is really no surprise.

The software interface is much nicer looking than most routers and is pretty responsive, although saving settings takes some time. Configuring the DHCP settings and static leases is very straightforward. Firewall configuration is about the same level of difficulty and granularity as pfSense which is good for advanced users but may confuse those who are beginners or average users. The good news is without adjusting the firewall the WAN connection works fine, and port forwarding is very straightforward. 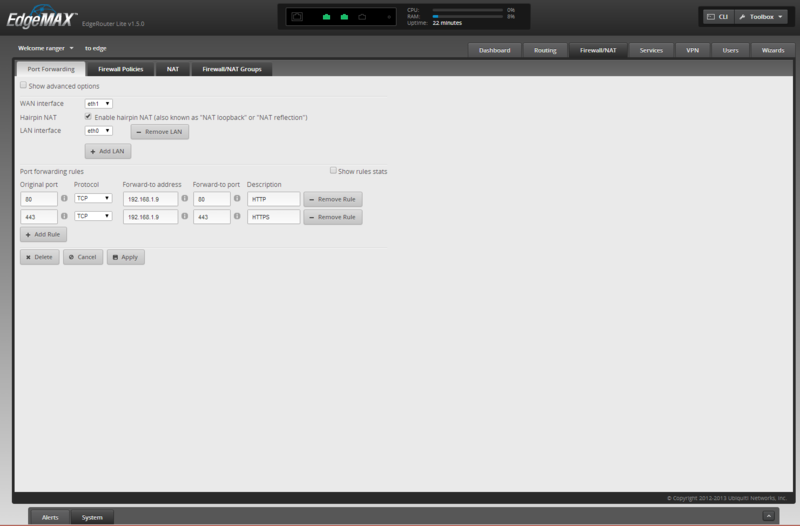 Although most features are comparable to pfSense, the EdgeRouter appears to be missing a few configuration options which pfSense has, now this may be that they are buried in the UI or available via CLI only. These features are mainly more advanced and not required by probably 80-90% of users. I'll go into more detail in the follow up review.

The device seems built well, looks good (well as good as I want a router to look), and seems to preform as well as my old pfSense setup. Preliminary measurements put power consumption at 7.7W (Kill-a-Watt). This power consumption is about 1/7 of the pfSense setup. As a size comparison the old pfSense system and the EdgeRouter Lite side by side is shown below. (pfSense system is Intel Core 2 Duo, 1GB RAM, 32GB SSD, 1 Integrated 1Gb NIC, and 1 PCIE Intel 1Gb NIC.)

The web UI is fairly easy to use and so far all options which I want to configure can be easily changed without using the CLI. After running the device for this setup and using it "in production" it runs a bit on the warm side, but is approximately what I would expect for this type of equipment (seems about the same temp as my Motorola Surfboard cable modem). As of right now I think this EdgeRouter Lite is a capable home networking and possible SMB router with a good set of features.

Overall the Ubiquiti EdgeRouter Lite is a very solid product and still has active development of the firmware after over a year of being released, which is hard to say about many other routers. This is a recommended product for anyone who doesn't mind learning a small amount about networking.